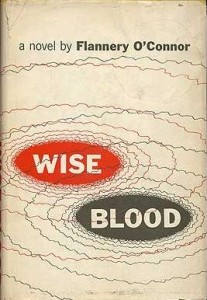 The Gospel stands out against morality. The purpose of the Church should be to call the bluff on any attempts of finding morality in the Gospel.

One of my all-time favorite novels is Flannery O’Connor’s Wise Blood. Its protagonist, Hazel Motes, is a deeply wounded character who, after the traumas of being raised by a legalistic (and abusive) evangelist and surviving combat in World War Two, returns home with the intention of founding a new antireligion, what he calls the “Church of God Without Christ.” He describes his new “church” as one in which “the blind don’t see and the lame don’t walk and what’s dead stays that way.” Without getting into a full summary or analysis of the novel, what fascinates me about Hazel Motes is that, the harder he tries to repudiate Christ, repudiate the Gospel, the more he seems marked and pursued by it. It starts with the way his “evangelism” for his new anti-religion resembles the very brand of evangelism he so loathes, to the point that others mistake his message for its opposite. It continues with the ways in which grace pursues him in the persons of several (primarily female) characters who, despite the manner in which he pushes them away, continue to care for him. Throughout the novel, he seems “marked” indelibly by the very Christ he says he eschews (the blind preacher-cum-huckster, Asa Hawks, tells him this outright), and Motes seems continually haunted, in the way O’Connor once referred to the south as “Christ-haunted,” through to the very end of his life, to the point that he experiences a salvation–at least of sorts–there. O’Connor describes him in the preface to Wise Blood as a “Christian maugre lui–in spite of himself.

At the end of the day, I suspect that’s what all believers are (I know I am): Christians in spite of ourselves. It is one of the most traditional and conservative beliefs of Christianity that all human beings, no matter how good or moral they may seem, are tainted by the fall. It is even entirely orthodox to believe that no one, under his or her own steam, is even capable of willing his or her own salvation. Human beings, in this view, are too vulnerable to their own wills, their self-interest, their own constructs, to be able to achieve or merit salvation on their own. Even St. Augustine admits that he was unable, on his own, to assent to God’s calling to him, such that that act had to be God’s:

I kept saying to myself, “See, let it be done now; let it be done now.” And as I said this I all but came to a firm decision. I all but did it — yet I did not quite. Still I did not fall back to my old condition, but stood aside for a moment and drew breath. And I tried again, and lacked only a very little of reaching the resolve — and then somewhat less, and then all but touched and grasped it. Yet I still did not quite reach or touch or grasp the goal, because I hesitated to die to death and to live to life. And the worse way, to which I was habituated, was stronger in me than the better, which I had not tried. And up to the very moment in which I was to become another man, the nearer the moment approached, the greater horror did it strike in me. But it did not strike me back, nor turn me aside, but held me in suspense.1

But this, of course, is the whole point, the very center and heart Christian belief, this crazy, irrational, wonderful thing we call the Gospel. O’Connor’s character personifies this quality in frightening and beautiful ways, doing overtly what we all do internally: fighting the grace to which he had already assented. Trying, and failing, to beat the action of grace aside in favor of their own egos. The important thing is that, in both cases, what makes both Augustine and Hazel Motes Christians–in spite of themselves–is entirely God’s action, not their own. Their own constructs, systems of belief, of morality, of religious doctrine–all the things they themselves will into existence and cling to like stubborn mollusks–are ultimately futile. Only the action of grace brings them the rest of the way. And that–the act of God that enables fallen humans to take that last step into a reconciled relationship with the divine–is what we call Gospel.

I mention all this because the ideas of what lies at the “heart” of the Gospel, and what constitutes the source of unity among Christian believers, have been sticking points in a lively (and sometimes acrimonious) debate that’s surfaced in Christian university circles over the last couple of months. Long story short, two members of the Council of Christian Colleges and Universities (Goshen College and Eastern Mennonite University) recently changed their hiring policies to include persons in same-sex marriages. On the heels of these announcements, the provost of another CCCU school, Union University, announced that Union was leaving the CCCU, primarily because the CCCU failed to immediately expel Goshen and EMU from the organization over that change. In his letter, Union’s provost, Samuel Oliver, argued that [his concept of traditional] “marriage is at the heart of the Gospel.”2

I have to admit that one of the reasons it’s taken me so long to blog on this matter is the degree to which that statement befuddled and angered me. I had to allow myself the time to quit huffing and puffing and throwing things to be able to write about the matter in a way that didn’t violate my own standards of what respectful debate between believers should look like.

I’ll admit for the record that I think that Oliver is dead wrong. I grew up within the Lutheran tradition (and am still active in the Lutheran church), and the idea of the Gospel holds a very special–revered–place in that tradition. We go on about it. A lot. John Pederson, a Lutheran theologian, Pastor Emeritus of Augustana Lutheran Church in Denver, and a long-time friend and spiritual mentor (not to mention one of my favorite people ever, and the person who introduced me to fine single-malt scotches), kindly gave me permission to reproduce a brief definition of the Gospel he shared with me in an email:

My most succinct statement would be something like: The gospel is God’s announcement of good news into all creation.

It is this (to my thinking very traditional and orthodox, and in no way limited to Lutheranism) way of thinking about the Gospel that made Oliver’s statement seem so alien and upsetting to me. To put a particular definition of marriage at the heart of the Gospel is to make a dangerous innovation on traditional Christian thought. To put a human construct in a place that only Christ has the right to occupy. The Gospel has never been a moral code, and has never been about anything human beings do. To replace that traditional idea of the Gospel with a moral code based on one particular (and arguable) interpretation of only a few passages of Scripture is, to my thinking, an offense against the Gospel, not a preservation of its witness. The Gospel is the opposite of any such code, a gift of unmerited grace. The whole point is that we can’t live up to even our own moral standards, much less God’s, such that grace is our only hope. The grace that chases us down–as it does Hazel Motes, and as it did Augustine–and calls for our response, however flawed, human, and inept our responses will be.

Our responses to grace are where things like moral codes and doctrinal ideas–such as ideas about what properly constitutes marriage–come into the picture. They are part of how Christians try to think and act in relation to the gift of grace, but are not themselves components of grace. And, of course, as fallen human beings, none of us can ever get that response exactly right. The fact that our responses are often divergent is a reflection of this imperfection: none of us have the right to claim moral high ground over any other, because none of us can claim the perfect response to grace. As much as I might disagree with Oliver, I have no basis on which to consider him anything other than a brother in Christ, because it is Christ’s action, not ours, that creates that relationships. All we can really do is recognize our mutual imperfection and try to continue, from our confusion and disagreement, to hammer out better responses to grace, and to one another. And we can only do that if we maintain relationship with one another. We’re simply not allowed to walk away. This is why I think the act of severing relationships with other, equally imperfect respondents to grace over the differences in our responses is also unwise–something I’ll try to argue more fully in the next installment.